This was made with a little help from my friends Tom Magee and Phil Openshaw. It was part of the creative progress engendered by this GLP comic:

I am very grateful to Phil and Tom for giving me permission to use pieces of their work.

This photograph was posted on Facebook by Phil Openshaw. The interface between positve and negative spaces grabbed my attention. I immediately began to see graphic possibilities for those shapes, even though the photo is not a particular favorite of mine. The image does not really do justice to the breadth of Phil’s wonderful talent. You should check out his site for his photography, and his fantastic asemic art.

The drawing below was made by Tom Magee and posted on his blog at Ello. 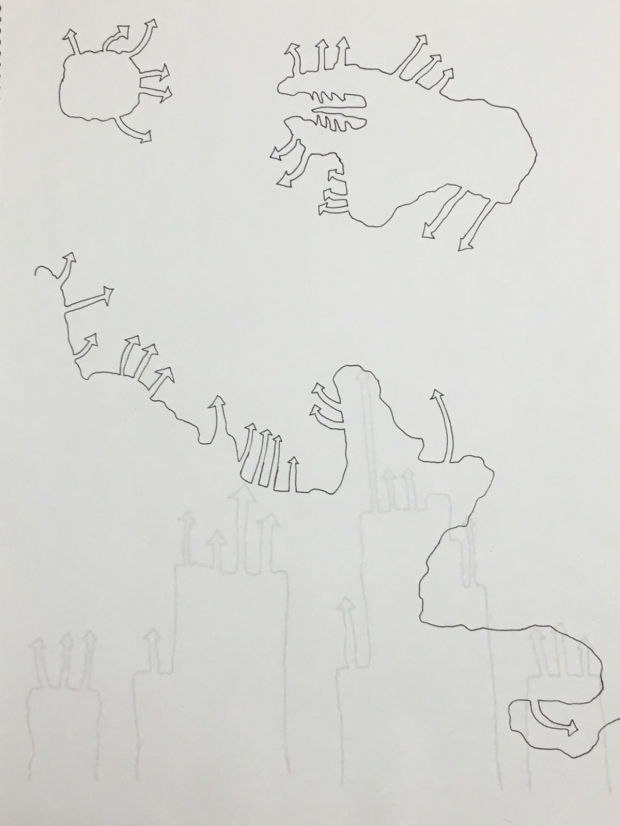 When I was making this comic, I reached a point where I had dynamic spaces divided between black and white and red, yet there was no story. When I make abstract comics and asemic writing there is always a story. It can be a fragment of a story, like a scrap of a lost manuscript, or a quotation from an imaginary book. Maybe it is barely a glimpse, like something seen through a window, or like one frozen frame of film. I try not to worry that I have only a small piece of the story, because I have always known that the viewer, the reader, brings the larger narrative to the work. Asemic writing has helped me fully understand that truth. But I did not have even a piece of a story until I saw Tom Magee’s drawing on Ello. The two floating entities in his drawing almost yelled at me, like little bratty monsters. They knew they were the catalysts for a GLP narrative, and they demanded their space in it.

I meant to post this a day or two before the Thanksgiving holiday, but my time was spent getting my house ready for guests, and then having nonstop fun and adventures with them while they are here. They are off to mass at the local Catholic church, so I have about 40 minutes for myself right now. To make amends for my neglect of my faithful internet friends, below is a link to a 3-page comic I submitted to the first issue of Ello’s first-ever print magazine, named contrarily Not For Print. The comic is a collaboration between Volodymyr Bilyk, Phil Openshaw and myself:

(If you are looking for an artful gift for someone on your Christmas list, I recommend that you click through Phil Openshaw’s link, and browse through the many prints available of his work. He is a wonderful photographer, and has also made some beautiful asemic pieces.)

We call it a collaboration, but all I did was give Phil Openshaw (who is a photographer interested in glitch art and asemic writng) some of my asemic letter forms in black and white. What he did with them is astounding: GO TAKE A LOOK!

When you come back, you can re-visit one of our previous collaborations, “Under the Thickety Dune“, in which I used one of his photographs for a GLP comic.

Another part of The Secret of Watchstone Rim.

This is a colaboration with Phil Openshaw, who graciously gave me permission to use a piece of this photograph for the branch patterns. Phil’s photograph is far more stunning than my little cartoon here. Take some time to check out his Tumblr archive, and his White Cloth Hall series; his photographs of urban decay are thick with texture and fascinating detail.