This panel is the one most misprinted in the history of Geranium Lake Properties color printing errors. It is accepted as common knowledge that no newspaper, out of the 17 that printed GLP in color, got it right. According to Ha Kim Ngoc, it is Yost’s least favorite misprint, an opinion she expressed to Michael Veerduer at the Strand bookstore, where they were both attending an event celebrating the 6th anniversary reprint of The Boy in the Yellow Leatherette Portmanteau by Gralie Bohe. A part of their conversation appeared in print in the New York Review of Books, June 10, 2010.

In the universe of Geranium Lake Properties, mild steel is the nickname for a legal psychoactive drug commonly used by the Hahnqui, the mainstream culture that exists outside of Jackalopian tradition. The culture is assumed to be modern American life, since the geography of GLP is often set within the United States. Most people have guessed that mild steel is a synonym for caffeine, but the GLP historian Michael Veerduer argues that caffeine, in the form of coffee, occupies a sacred place in Jackalopian tradition. He also points out that one of the most significant qualities of mild steel is its lethality for children. Other people have proposed mild steel as a representation of nicotine or firearms.

Pictured here is the misprint from the Toronto Star. More misprints can be viewed in this poster for sale at Zazzle.

This is a mystery. I have consulted with the usual experts (Ha Kim Ngoc, Michael Veerduer) and with the unusual ones (Algernon and Agatha Dawe-Saffery), and we still have no clue. I re-read my copy of The Boy in the Yellow Leatherette Portmanteau by Gralie Bohe, which is always an enlightening experience, and reviewed the bulk of my notes on Jackalopian culture. No clue in any of those archives. This is so very asemic. Feel free to exercise your asemic skills of authorship over something you have no authority to author. (Do I really need to add a winking emoji to that sentence? I think it’s very winky as it is.)

Have you noticed how asemic writing might be the perfect anti-authoritative literature?

Yost penciled “5CB” and “(The Silver Bodhisattva)” on the back of the original artwork for this panel. After Yost disappeared in 1999, his assistant Ha Kim Ngoc revealed to GLP historian Michael Veerduer that “5CB” was an abbreviation for “Five Carthaginian Bodhisattvas”. We know of sixteen GLP panels that are marked with this abbreviation.

There is no limit to the number of godparents for a jackalope child, but at least one of them should be a forestcousin. Jack Loki had four such creatures at his christening, invited by his Finnish grandmother. All were metsän kuninkaat with home territories near the river Kapperijoki in Finland.

For a glimpse of all four kings: Metsän Kuninkaat

Sometimes, a prayer is needed. Even when you’re an atheist.

Perhaps you would like to view this page at the Metropolitan Museum of Art, The Story of Cinnabar and Vermilion (HgS).

In the Jackalopian calendar, Larrikin Days are traditionally the fourth Tuesday of each month. On these days, jackalopes are encouraged to express their larrikins, their “true selves”. A jackalope will have at least one larrikin name, and most jackalopes have several names for different aspects of their true selves. Some of these may be secret identities, but most are shared with family, friends or the public. A nom de guerre or nom de plume would be a larrikin name.

This was Yost’s response to the Joseph Cornell box Toward the Blue Peninsula. The box was Cornell’s response to a poem by Emily Dickinson. Yost wrote in pencil on the back of the original art: “It might be easier to fail with land in sight than gain our blue sagrada samana.” You can see another version here.

I am a little disappointed with Zazzle this morning. I have made some changes in the collections at the I Galosh shop, and now the interface is sulking and refusing to show the contents of those collections. After years of using Zazzle, I have no expectations of it as a marketplace, but I have evolved a place for it in my creative process. It has become one of my dreambooks, and I would wish that others could partake of that function. Luckily, however messed up the browsing experience might be, the links are working fine, so I can continue with this bluish theme and show you a Geranium Lakes Property retrospective made into a poster.

“Are you familiar with the phrase “best laid plans”? Jack asked.

“Yes, of course,” said the cartographer.

“Well, what I would like, really, is a map that would get me directly to Awry, without the fuss and bother of making all those plans.”

This small Haworthia is thriving on my front stoop. Any plant that enjoys large amounts of neglect is perfect for me. 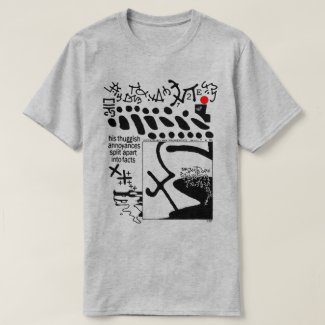 A snapshot of my morning, on the front stoop with coffee, after the storm.

…if this is your name, you will have to share it with the Drangosteemporium. Your name appears to be their official trademark:

From 1985 comes one of my fave GLP misprints made by Newark’s Star-Ledger. Bottom image is the correct version of “Three Square Assurances from the World-Sharers”. If you’ve been paying attention, you know which of the two was Yost’s favorite.

We have traveled already a week into the new year and I realize no one has given me a calendar this year, not even my insurance company. So I made one for myself, using stuff from the Geranium Lake Properties Pattern Book: